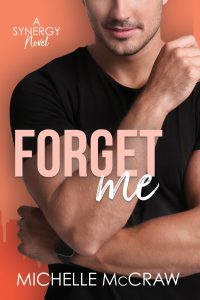 “Here you are.” A deep voice came from the hall outside. Mateo filled the doorway with his broad shoulders and impossible height. He held a brown paper shopping bag in each hand, the tendons taut in his exposed forearms.

Why the hell was I looking at his forearms? The danger was with his mouth. What would he say to embarrass me in front of Natalie?

Looking at his mouth was a mistake, too, as I’d learned last week in my kitchen, the night I’d agreed to take him to the gala as my date. His lips were full and lush, and when he’d flashed me that sexy, tilted grin, my sensible brain had gone offline. Instead of remembering all the reasons why it was a bad idea, I’d focused on his lips and whether they’d feel soft as they looked if I reached out a fingertip to touch them.

When they curled up into a smile, I blinked away. No looking at his mouth! When I gazed at the crushed paper in my hand, I remembered what we were there for: a gala committee meeting. And Mateo didn’t belong.

“What are you doing here?”

He lifted the bags, his arms flexing. A delicious smell wafted into the conference room. “Ben said you had a meeting tonight. I brought food.”

Having a one-on-one dinner with Mateo was one thing, but exposing Larissa, who already didn’t like me, to Mateo’s bumbling was a terrible idea. No matter how kind he’d been the other night.

I set a hand on the sleeve of his painted-on black compression tee and nudged him back outside the door. God, his arm was like a rock. A lickable one.

“We talked about this,” I hissed. “You were supposed to text me.”

I snatched my phone out of my pocket. “You texted me, In being sonnet. What the hell did that mean?”

He grimaced. “Autocorrect and I don’t get along. I meant to say, ‘I’m bringing dinner,’ but—”

“No. We’re fine. Thank you. I’m sure you can take that to Cooper and Ben. I’m not hungry.” As I moved toward him to escort him out of the building, my stomach protested with a growl so loud everyone on the floor had to hear it.

“Ah. But you don’t know what I brought. And you don’t want to be hangry at your meeting.” He shook the bags slightly, and the smell of onions and peppers beckoned to me.

My stomach growled again, but I cut it off with a fist pressed to my middle. I wished he wasn’t so tall and I didn’t have to bend back my neck so far to look him in the eye. “I’m not hangry.”

“Aren’t you?” he said softly. “Or is something else the matter?”

That soft tone in his voice, so inviting, so unassuming, made me want to tell him all my problems. About how exhausted I was from balancing a full-time job with volunteer work. How hard I tried to please Larissa while getting so little in return. Why did he have to be so…so nice?

“What’s this?” I hadn’t noticed Larissa come up behind Mateo.

Crap. Now Larissa would have to meet Mateo and see how awkward he was. She’d probably ban him from all future foundation events, especially the gala. I had to get him out of there. I laid a hand on his chest and pushed. But I was like a mosquito trying to move a mammoth.

“Lover’s quarrel.” Natalie crossed her arms over her chest as she leaned against the conference room doorway.

“What?” I whipped my head around to look at her. What had she heard?

“I’m Natalie Jones.” Ignoring my protest, she stuck out her hand.

Mateo set down one of the bags and clasped her hand. “Mateo Rivera.” He turned to Larissa and shook her hand. “And you must be the Larissa I’ve heard so much about.”

Larissa’s cheeks turned pink, and she seemed to wilt. And then she made a sound I’d never heard come out of her perfectly lined mouth. She tittered, her hand lingering in his. “Larissa Lane.”

What. The. Hell. I had to get this situation back under control. And that meant getting rid of Mateo. “Mateo was just leaving. I’ll see you later, Mateo.”

“What are you talking about?” Natalie put a hand on Mateo’s forearm, and for some reason, that made my back teeth crunch together. “He brought us dinner. I’m not letting anything that delicious walk out.”

Mateo tugged his hand out of Larissa’s grasp and turned back to Natalie, one corner of his mouth quirking up and an honest-to-God dimple denting his cheek.

Whoa. Even the second-hand sparkle was a lot.

Larissa squeezed around him into the conference room, and when she took the position of authority at the back of the room, her cool mask was back. Cocking a hip, she rested her hands on her hips in a power pose. She arched an eyebrow. “You’re with Miriam?”

I heard the disbelief in her tone, and for a second, I wanted to claim him, to show her that just because I preferred to fit into the background and do good work and be recognized for it, it didn’t mean I couldn’t attract a man. Though who was I kidding? Mateo was all kinds of wrong for me. I didn’t believe we’d work together. Larissa, who was both insightful and successful, would never buy it.

Just as I opened my mouth to say no, Mateo said, “I am. We’re going to the gala together.”

Want to read more? Just hit this link to buy Forget Me.